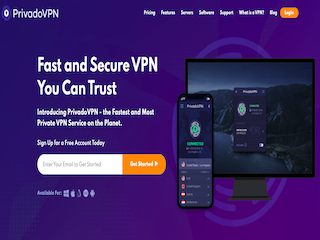 PrivadoVPN isn’t as well known yet in Internet privacy circles, but it will be. Despite being relatively new, this zero-logs VPN service already has 200+ servers in 45 nations. They also own their infrastructure, so have total control over their network quality, security, and speed.

PrivadoVPN offers OpenVPN and IPsec (IKEv2) for protocols, as well as a SOCKS5 proxy feature for P2P users that masks IP addresses, but doesn’t encrypt data for faster speeds.

As a Swiss company, which has the strongest consumer privacy laws in the world, PrivadoVPN is very focused on privacy and offers a great service for you to easily maintain your online security. That is part of why they offer a free VPN plan which utilizes the same security and privacy technologies as their paid plans.

PrivadoVPN has no free trial, but even better, offers a free plan that provides 10 GB of high-speed access every 30 days on 12 server locations. Both paid plans give you unlimited monthly data, access to all servers in all locations, and the other benefits listed below.

PrivadoVPN does not offer a free trial, but they do have a robust free plan with unlimited speeds and a generous monthly data allotment. We saw no money back guarantee on their website.

In addition to being a zero-logs VPN service, PrivadoVPN owns and operates their own backbone and runs their own DNS servers. Over 40 SOCKS5 proxy servers are also available for people who want to torrent and keep their speeds high while masking their IP address. This is a great additional feature for those looking for a nice balance between speed and privacy.

Unlike many other VPNs, PrivadoVPN has a strict no-log policy. In fact, their privacy policy page precisely lays out their key policies at the front and center.

PrivadoVPN logs the following information and only retains it to maintain accounts:

According to their Free VPN page, PrivadoVPN considers individual privacy to be a human right that shouldn’t be unavailable to those who can’t afford expensive services, hence why they offer a free account option.

All PrivadoVPN servers allow you to use torrents and don’t put restrictions on P2P file transfers. The addition of the SOCKS5 proxy makes it easier for customers to maintain high speeds while still keeping their identity hidden.

There is an extensive support page and 24/7 email support offered with all PrivadoVPN plans. While it would be better if there was a real-time support option, responses to questions are pretty quick.

We have included screenshots of both the Windows and macOS desktop apps below.

Currently, PrivadoVPN supports mobile apps for iOS and Android devices, though the iOS app is only available on paid plans.

Both iOS and Android apps have all of the same features as the desktop versions and make it easy to secure all mobile data transfers.

These are some benefits of the PrivadoVPN apps:

Because they own their network and purchase IP addresses directly from ISPs, they have the ability to respond quickly to any issues like server outages and IP blocking. This is a major feature that we recommend any user to look for when signing up with a VPN service, especially with a long-term plan. We also found PrivadoVPN’s connections to be reliable and fast for gaming and streaming on Netflix and BBC iPlayer.

We tested this with a few different systems in various locations and PrivadoVPN’s IP check resolved to the exact IP address that was shown on the client. We also found no DNS leaks and all servers reported back as we expected.

Along with the simple configuration, including desktop and mobile apps, PrivadoVPN offers the following bonus features.

We are very impressed with PrivadoVPN. Their apps work well and are easy to use, it’s a solid network, it works for unblocking streaming services, and our speeds were consistently high. They also have one of the best and clearest privacy policies we’ve seen. Users will find a lot to love with this service and can feel secure knowing that their data will be well protected.

Founded in 2016, iTop VPN is a secure and reliable VPN service provider that has over 10 million users worldwide.  iTop VPN offers Internet … END_OF_DOCUMENT_TOKEN_TO_BE_REPLACED

OVPN is a VPN service that is said to seriously uphold privacy and security. According to their site and several other sources, they don’t just … END_OF_DOCUMENT_TOKEN_TO_BE_REPLACED

VeePN is a fast and secure VPN service that protects your privacy online. With access to unlimited traffic and bandwidth, 10 simultaneous connections, … END_OF_DOCUMENT_TOKEN_TO_BE_REPLACED