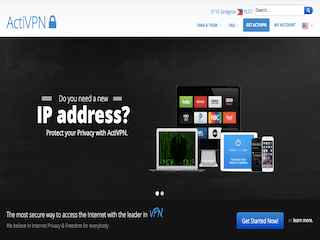 ActiVPN is a VPN services provider headquartered in the Netherlands and has been in business since 2011. ActiVPN supports OpenVPN protocols in 32 countries and offers 60+ IP addresses. ActiVPN offers an OpenVPN 2048-bit Encryption, bypassing all censorship and all restrictions. They also have no log retention.

Choose from either ActiVPN’s 1-month, 1-year and 2-year subscription plans. All these plans cover all the features that this provider offers including unlimited data transfer, simultaneous use on 5 devices and use on multiple platforms.

You can pay for ActiVPN’s service via credit cards, PayPal and Bitcoin.

ActiVPN doesn’t offer a free trial or a money-back guarantee. However, ActiVPN does have a refund policy but there are certain conditions that must be met before they refund your money. These conditions include:

The refund policy does not cover inability to connect or access a specific server or slow speeds.

ActiVPN anonymously encrypts all traffic. They use AES-CBC 256 plus PKI RSA 2048 bits for improved security and encryption. ActiVPN also secures public wifi to protect you and ensures the integrity of your internet.

It is also good to note that ActiVPN keeps an update on their website that informs users if authorities have asked for any information or documents. And based on our most recent check, ActiVPN has not received any National Security letters or FISA court orders.

Torrenting is allowed on all of ActiVPN’s servers. However, there have been reports that only one of their US servers can mask IP addresses. That could put the location at risk on P2P networks or to anyone monitoring your connection. For that reason, while torrenting is allowed, ActiVPN is not one of our top choices for torrenting.

ActiVPN has a contact form available on their website and for increased privacy, you can use their PGP key. At most, their customer support team replies to emails and concerns in 2 days. However, upon testing the support team, they actually respond in less than a day. According to their site their average response time is 34 minutes.

One of the features stated on their site is that ActiVPN is an easy-to-use software. In terms of connection, ActiVPN is quick while using a local server however, it tends to slow down when tested on overseas servers. Make sure you use servers closest to you to have the best speed possible.

All of their applications from desktop apps to mobile apps work well and keep your activity secure with their AES-CBC 256-bit encryption. This offers a high level of security that protects your data from trackers and hackers.

ActiVPN has 65 servers in over 30 countries, and you can connect to 5 simultaneous devices via these servers.

Based on our IP check, ActiVPN resolved to the exact IP address that was shown on the client. It also anonymizes activity and data. We also found no DNS leaks.

While ActiVPN generally has good speed on a lot of their servers, there are some servers that show a dramatic speed loss when compared from a local server to an overseas server.

ActiVPN can also improve on their compatibility with streaming services. When tested, Netflix detects that VPN was being used. Other streaming sites that ActiVPN could not bypass were Hulu and BBC iPlayer.

ActiVPN is a decent VPN service provider because of its good speed, no-logs policy, multiple payment options and two-year subscription option, to name a few. However, when compared to market leaders ActiVPN is not yet at their level. There are things that they can still improve on. While ActiVPN has decent features, there are other providers that really offer better service.

Founded in 2016, iTop VPN is a secure and reliable VPN service provider that has over 10 million users worldwide.  iTop VPN offers Internet … END_OF_DOCUMENT_TOKEN_TO_BE_REPLACED

OVPN is a VPN service that is said to seriously uphold privacy and security. According to their site and several other sources, they don’t just … END_OF_DOCUMENT_TOKEN_TO_BE_REPLACED

VeePN is a fast and secure VPN service that protects your privacy online. With access to unlimited traffic and bandwidth, 10 simultaneous connections, … END_OF_DOCUMENT_TOKEN_TO_BE_REPLACED