Since the early days of the World Wide Web, encryption has been a popular topic for protecting communication between individuals. However, it’s both grown in popularity and become a far more contentious issue in the last decade or so thanks to what many see as over encroachment by the government. What Edward Snowden and others have shown the world is that no one’s communications are safe, regardless of what the law may have you believe.

Enter Cryptocat. This open-source application was designed to allow encrypted chatting online whether through the web or on a mobile device. The server involved is only trusted with data that has already gone through encryption. That means all the encryption happens on the client side using an end-to-end model. For cryptographer and creator, Nadim Kobeissi, this program represents the embodiment of his own personal mission.

The stated goal of Cryptocat is to help average users take advantage of encrypted communication. To this end, it aims to walk the line between high-end security and a user-friendly interface. There are many reasons to believe that CryptoCat may have already hit this target. While it’s far more accessible than Pidgin, the program is also more private than competitive services like Internet Relay Chat and Google Talk. 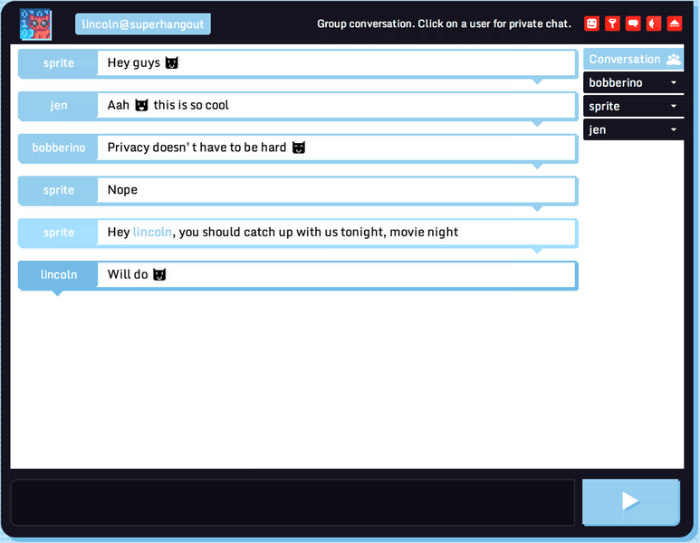 Cryptocat has already found a number of fans in the cryptography community. While it originally received scrutiny due to privacy concerns, most seemed to have warmed up to what this program can do largely because Kobeissi switched to browser-native random number generation for encryption. In fact, the program recently surpassed 750,000 downloads.

Kobeissi is far from done too. His new project, Minilock, is going to make encryption even simpler still. Users won’t even have to sign up or start an account of some sort in order to use it. There will be no need for storing a key on the user’s machine either. Rather, users can simply access the program and use it as necessary before moving on.

This app can run on Mac OS x and as a browser extension for Mozilla Firefox, Google Chrome, Opera, Apple Safari and as a mobile app for the iPhone.

If you’ve been concerned about the level of privacy you’re receiving when chatting with friends or colleagues, it’s worth checking out Cryptocat. Even if you’ve never used encryption before, Nadim Kobeissi has made a program that is perfect for the novice yet has still been well received by veteran cryptographers.

For several years, Cryptocat has been through a rollercoaster ride. In 2013, a security researcher pointed out a security bug that could be used to decrypt any group chat message that had taken place using Cryptocat between September 2012 and 19 April 2013. Cryptocat issued a security advisory and informed users that past group conversations may have been compromised.

In 2014, Cryptocat made improvements on user authentication in response to an audit criticizing Cryptocat’s authentication model as insufficient. And in 2016, Kobeissi took Cryptocal offline due to 19 months of non-maintenance, only to re-release Cryptocat as a desktop software.

However, in 2019, Cryptocat finally closed its doors and was discontinued. In a tweet they released in February 2019, they said “We are discontinuing the Cryptocat service starting tomorrow. The software is no longer maintained. Looking for alternatives? We recommend Wire. Thank you for sharing this journey with us.”

Founded in 2016, iTop VPN is a secure and reliable VPN service provider that has over 10 million users worldwide.  iTop VPN offers Internet … END_OF_DOCUMENT_TOKEN_TO_BE_REPLACED

OVPN is a VPN service that is said to seriously uphold privacy and security. According to their site and several other sources, they don’t just … END_OF_DOCUMENT_TOKEN_TO_BE_REPLACED

VeePN is a fast and secure VPN service that protects your privacy online. With access to unlimited traffic and bandwidth, 10 simultaneous connections, … END_OF_DOCUMENT_TOKEN_TO_BE_REPLACED