ExpressVPN Rating From the Android Market

You can see that most people are pretty happy with ExpressVPN and the fact that they are actively updated and working on improving their VPN client seems to speak in their favor.  Here on the right you can see their user rating — (4 and a half stars) which is quite a good rating considering how often people like to complain on the Internet.

ExpressVPN for Android – Scope of Use

If you don’t know about ExpressVPN, you can surf the Internet anonymously, safely and bypass geographical restrictions with ease. ExpressVPN allows you to do everything that other VPN services offer at faster speeds.

ExpressVPN for Android allows you to: 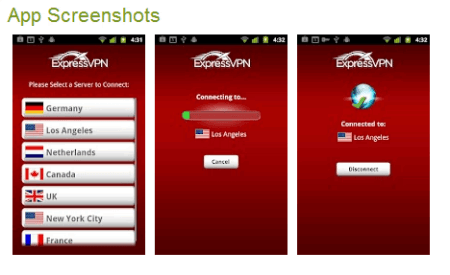 Here is a list of some features offered by ExpressVPN for Android:

ExpressVPN for Android is available for free with all service plans offered by ExpressVPN.

Read our Review of ExpressVPN and find out why that are one of our favorite providers.

Founded in 2016, iTop VPN is a secure and reliable VPN service provider that has over 10 million users worldwide.  iTop VPN offers Internet … END_OF_DOCUMENT_TOKEN_TO_BE_REPLACED

OVPN is a VPN service that is said to seriously uphold privacy and security. According to their site and several other sources, they don’t just … END_OF_DOCUMENT_TOKEN_TO_BE_REPLACED

VeePN is a fast and secure VPN service that protects your privacy online. With access to unlimited traffic and bandwidth, 10 simultaneous connections, … END_OF_DOCUMENT_TOKEN_TO_BE_REPLACED