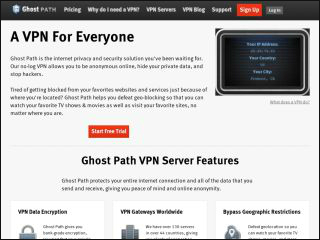 Ghostpath offers a VPN service that supports all three of the major protocols and that has a decent range of nations to choose from as far as servers go. They also offer unlimited plans, which are great for people who like to use their VPN most of the time.

A speed test for Ghostpath will be coming soon.

Pricing plans don’t get much simpler than they are with Ghost Path. All of their plans include unlimited bandwidth. They also include unlimited switching between servers. Prices are based on the length of service that you choose. They include:

Ghost Path Setup / How to Use Ghost Path

Ghost Path can be used with three different VPN clients, offering a bit of flexibility for users. Ghost Path has its own client, which is obviously the best option. If you wish, however, you can also use Viscosity for OpenVPN connectivity or you can use Tunnelblick, which is a bit more advanced and less user-friendly, but which also gets good reviews from the company as far as compatibility with their service is concerned.

Ghost Path is currently operating 135+ servers spread across 40+ countries. Or, as the company themselves puts it “a bunch of servers in a bunch of countries”. The list of countries includes:

Ghost Path supports the PPTP, OpenVPN and L2TP protocols. This makes it compatible with most mobile devices, as well as able to provide the current favorite protocol, OpenVPN.

Ghost Path vs The Competition

Ghost Path has a very convenient pricing structure, which is something to take note of. They also offer a very broad selection of nations compared to some other services, which may be of particular interest to those who are trying to avoid geo-restrictions on certain content. The compatibility with VPN clients outside of the ones they produce themselves also makes Ghost Path an interesting option.

Ghost Path has an extensive list of servers, good pricing and some good options for clients. If you’re looking for something new, you may want to try them. This provider has servers located in many of the major American cities, which also gives you plenty of options if you want to keep the US IP address and simply want increased privacy.

OVPN is a VPN service that is said to seriously uphold privacy and security. According to their site and several other sources, they don’t just … END_OF_DOCUMENT_TOKEN_TO_BE_REPLACED

VeePN is a fast and secure VPN service that protects your privacy online. With access to unlimited traffic and bandwidth, 10 simultaneous connections, … END_OF_DOCUMENT_TOKEN_TO_BE_REPLACED

PrivadoVPN isn’t as well known yet in Internet privacy circles, but it will be. Despite being relatively new, this zero-logs VPN service already has … END_OF_DOCUMENT_TOKEN_TO_BE_REPLACED