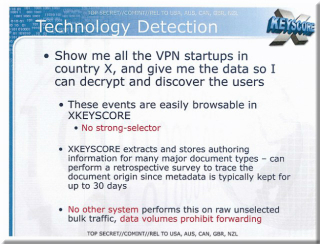 An article in Ars Technica reveals that the NSA can do a lot more than just store people’s metadata for a while. The NSA actually has the capability to passively scan the Internet for computers with vulnerabilities that it knows how to exploit. It can also look for computers that may have already been in exploited in ways that the NSA can use to its own advantages. It goes still further than this.

The XKEYSCORE system that was revealed via the leaks provided by Edward Snowden was already known to be far more powerful than was ever stated publically before the leaks. It’s powers, however, extend to being able to track VPN usage from some nations and to being able to get metadata that the NSA could later use to break PGP encryption. According to the article, the NSA usually keeps this data for 30 days, making it possible for them to go through that data later, if they choose. According to the documents leaked by Snowden, a user could look at all the VPN connections started up from a given nation and use that data to determine the user of that connection.

The top secret documents boast that no other system can do this on bulk traffic. That, of course, means that the data is simply gathered and scanned through at random and that it is not a targeted search of data known to belong to someone who is under surveillance.

This information goes far beyond the metadata that the NSA first claimed that was its only target. With the NSA having recently opened up a huge new datacenter, there’s no doubt that they are sorting through this type of data now, without warrants, transparency or accountability.

Founded in 2016, iTop VPN is a secure and reliable VPN service provider that has over 10 million users worldwide.  iTop VPN offers Internet … END_OF_DOCUMENT_TOKEN_TO_BE_REPLACED

OVPN is a VPN service that is said to seriously uphold privacy and security. According to their site and several other sources, they don’t just … END_OF_DOCUMENT_TOKEN_TO_BE_REPLACED

VeePN is a fast and secure VPN service that protects your privacy online. With access to unlimited traffic and bandwidth, 10 simultaneous connections, … END_OF_DOCUMENT_TOKEN_TO_BE_REPLACED