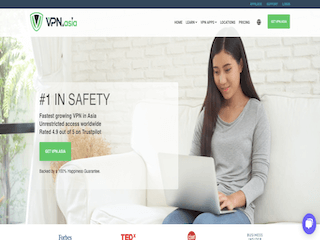 VPN.Asia is headquartered in Hong Kong. The company offers a large network, strong encryption and has its own client for Windows and Mac, as well as iOS and Android. Torrenting is allowed on this service and they keep no logs, according to their website. Their client and DNS servers demonstrate that there’s some connection here with one of our preferred providers, IPVanish, though that’s not stated on the VPN.Asia site.

VPN.Asia offers lower prices for longer subscription terms. All of their plans come with unlimited transfer and bandwidth. The pricing is as follows:

You can pay with PayPal, credit cards, Bitcoin or Paymentwall.

VPN.Asia previously offered a three-day free trial. However, there seems to be no information on their site anymore regarding this. But in case you are unsatisfied with their service, they do have a 30-day money-back guarantee.

VPN.asia does not collect or log any traffic or use of its Virtual Private Network service.

P2P and torrent traffic are both allowed on this service, according to their knowledgebase.

VPN.Asia has a live chat feature that you can use to get answers to any questions you might have. They say they’re available around the clock, but that doesn’t line up with our experience. They also have a ticketing system and knowledge base if you want to troubleshoot on your own.

Once you sign up with VPN.Asia, you’ll receive an email with the instructions to download their software and a link that’ll take you to the right page. The Windows client, as you can see, looks quite a bit like the old IPVanish client. As you’ll find out below, that isn’t where the similarities end.

There are clients for Windows, Mac OS X and Android devices. You can manually setup the service on Linux, routers and iOS.

The speed over the VPN.Asia network was very impressive. We tested it on a 50Mbps/5Mbps line located in Albuquerque. We ran two tests, one hitting a server in San Jose and one in Phoenix. The results were basically identical, with our speed barely being reduced at all. The results of the San Jose test are shown below.

Our IP and DNS server addresses were effectively hidden when connected to the VPN.Asia network. The DNS test results are shown below, which demonstrate some further similarities to the IPVanish network.

We did not find that the 24/7 tech support promise panned out. We created a ticket following installation problems with the client. We never received a response and the live chat window was unavailable.

VPN.Asia has a fast network, an easy-to-use client and it offers good encryption. The service does not log and allows torrenting. There isn’t much here not to like. If you’re an IPVanish customer already, however, there doesn’t seem to be much reason to switch, since quite a bit is shared between these two services. Customer service could be dodgy, as well.

Founded in 2016, iTop VPN is a secure and reliable VPN service provider that has over 10 million users worldwide.  iTop VPN offers Internet … END_OF_DOCUMENT_TOKEN_TO_BE_REPLACED

OVPN is a VPN service that is said to seriously uphold privacy and security. According to their site and several other sources, they don’t just … END_OF_DOCUMENT_TOKEN_TO_BE_REPLACED

VeePN is a fast and secure VPN service that protects your privacy online. With access to unlimited traffic and bandwidth, 10 simultaneous connections, … END_OF_DOCUMENT_TOKEN_TO_BE_REPLACED