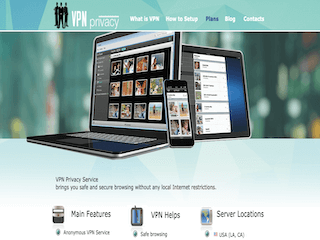 VPN Privacy is headquartered in Montréal, Canada and has been in operation since 2002. The company provides VPN servers in several different countries, with unlimited bandwidth plans and other features that users might find attractive. In addition to the Montréal offices, they have offices in Scranton, PA.

Plans come with the following:

Plans can be purchased via credit cards or PayPal. In addition to paying for VPNPrivacy via PayPal or credit cards, you can utilize Western Union money transfers if you want to maximize your privacy.

While VPN Privacy has a “Free Trial” option on their list of plans, it is not really for free. Instead, it is a one-week VPN account that costs $3.50.

Within the company’s terms of service you will find the phrase “We are not interested in what you do on the Internet.” There appear to be no restrictions on torrent usage.

For general questions, finance or technical support you can email them at info@vpnprivacy.com or through skype (ID: vpn.privacy). You can also explore their blog which covers a lot of information on vpn, reviews on other services and other tips and tricks when using VPN services.

VPN Privacy supports the PPTP, SSTP and OpenVPN protocols. Each of the servers is connected to a 100mbit channel. VPN Privacy has an unlimited bandwidth policy, which is nice, but they also only have servers located in four nations. If your principal goal was to defeat geo-restrictions, you may be better off with a provider that offers servers in more nations. Aside from that, the fact that they offer the SSTP protocol is a nice touch and the pricing is competitive.

VPN Privacy has servers located in four nations: USA, Asia, Canada and Europe. The number of available IP addresses is not specified on the site.

VPN Privacy does not limit speed but upon testing, our speed declined greatly compared to our baseline.

Our IP was changed successfully when connected to this service. Our DNS, however, leaked.

VPN Privacy has a low number of server locations when compared to other VPN providers. There is also a lack of information on their website.

Founded in 2016, iTop VPN is a secure and reliable VPN service provider that has over 10 million users worldwide.  iTop VPN offers Internet … END_OF_DOCUMENT_TOKEN_TO_BE_REPLACED

OVPN is a VPN service that is said to seriously uphold privacy and security. According to their site and several other sources, they don’t just … END_OF_DOCUMENT_TOKEN_TO_BE_REPLACED

VeePN is a fast and secure VPN service that protects your privacy online. With access to unlimited traffic and bandwidth, 10 simultaneous connections, … END_OF_DOCUMENT_TOKEN_TO_BE_REPLACED