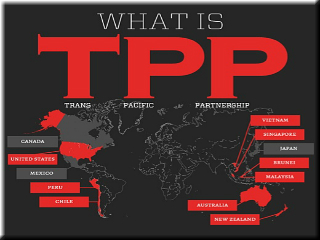 If you keep up with issues having to do with Internet freedom, you’ve probably run across the term TPP before. This is an acronym for Trans-Pacific Partnership. The Trans-Pacific Partnership is, essentially, a trade agreement. What has Internet privacy advocates worried about this trade agreement is that the process by which it was developed is not at all transparent and some of the particulars of this partnership have serious implications for the free exchange of information online.

From SOPA to PIPA and beyond, the entertainment industry has been working hard to try to get copyright enforcement laws written in their favor. In many cases, when they tried to do this through the normal channels, public outcry has prevented officials from acting on the demands of the entertainment industry. The TPP has some very serious implications as far as intellectual property rights enforcement goes.

One of the most controversial measures regarding copyright law is the Digital Millennium Copyright Act. The TPP would likely strengthen this act and require that other nations adopt similar laws. In the United States, being a party to the TPP may mean that Congress couldn’t even change laws to address the needs expressed by citizens in this regard.

Certain nations are also working hard to make the restrictions on fair use even stricter than they already are. Fair use laws oftentimes enable some of the most vibrant and insightful political speech and other types of speech on the Internet. At the behest of copyright holders, these rights could be seriously curtailed via an international treaty that is being negotiated without input from the general public and, in fact, even without giving the public the ability to get information about the proceedings.

The TPP is being widely derided and protested by Internet freedom advocacy groups. If this agreement is approved, the way global IP enforcement is executed will change dramatically. Most of the changes are not being done in the interest of the Internet, facilitating free speech or anything else that most Internet users would smile upon. In fact, the entertainment industry and the pharmaceutical industries in the United States are getting the most out of this particular agreement and the Internet using population of the world is getting the least.

Founded in 2016, iTop VPN is a secure and reliable VPN service provider that has over 10 million users worldwide.  iTop VPN offers Internet … END_OF_DOCUMENT_TOKEN_TO_BE_REPLACED

OVPN is a VPN service that is said to seriously uphold privacy and security. According to their site and several other sources, they don’t just … END_OF_DOCUMENT_TOKEN_TO_BE_REPLACED

VeePN is a fast and secure VPN service that protects your privacy online. With access to unlimited traffic and bandwidth, 10 simultaneous connections, … END_OF_DOCUMENT_TOKEN_TO_BE_REPLACED