VyprVPN, an excellent VPN provider, was recently implicated in a rant posted on Cryptome.org.The accusation named VyprVPN along with Giganews, Data Foundry, several USENET providers and Golden Frog, a corporate partner of Giganews and the provider of VyprVPN as part of a massive FBI operation to harvest user data.

Golden Frog, in a move that is completely the opposite of what one would expect if the allegations were true, recently reincorporated in Switzerland precisely because they wanted better privacy protection than they could get in the US.

Other major VPN providers, Private Internet Access included, which is advertised on TorrentFreak a great deal as a very privacy friendly business, are located in the United States. If the conspiracy is based on the logic that being located in the United States somehow makes VyprVPN more susceptible to being used by shadowy government agencies to gather user data, then it would seem like any US-based company would be more likely to be involved in such a plot.

The point is that these companies aren’t involved in such a plot, VyprVPN included.

In the accusations, which are largely leveled against Giganews, VyprVPN is accused of taking user activity, logging it and making it easily accessible to the “government agents working there”.

Not only this, VyprVPN is also accused of helping the Chinese government to target dissidents.

It’s very easy to make these types of accusations. The usual crowd that is persuaded by them doesn’t demand any sort of convincing evidence. When a company comes out and denies the allegations, it is simply seen as more evidence of guilt.

What is set up is an infinite feedback loop where senseless arguments simply get repeated and every point brought up to refute them is dismissed as either being part of the conspiracy in the first place or is simply met with a slew of a relevant questions and even more accusations.

The problem with hoaxes and, specifically, conspiracy theories is that they really can do damage. Looking at the above link and reading the material, it’s easy enough to see that the person who wrote it is likely a bit detached from reality. 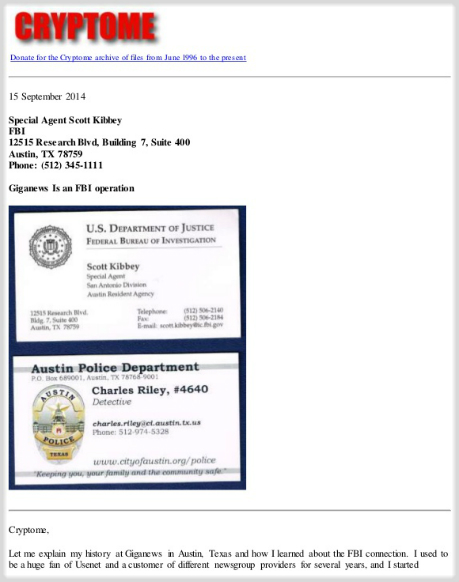 What Makes it Ludicrous?

If you want to make a conspiracy theorist nervous, force them to stick to the type of evidence that would be required in court to support their accusations. None of the accusations leveled by the poster on Cryptome rise to that standard.

The narrative essentially goes that the poster was employed at Giganews and, after he objected to how an illegal pornography investigation was being conducted, he came into conflict with people at the company. He was later brought to an FBI office in Austin, where FBI agents conveniently offered him a great deal of exposition on their sinister plan and then decided to recruit him into the fold, as well.

The poster was even offered a new name and identity, according to his story, adding even more paranoid thriller elements to the plot. Fortunately, the poster could not go along with the sinister plan a decided to reveal it to the world, along with an endless string of connections he made up between various companies, people within those companies, government organizations, and historical events and beyond.

Giganews, which takes the brunt of the accusations, is run by a group of Texas lawyers who have shown nothing but irritation toward government intrusion into the open Internet. They do not care for people having their Internet activity spied upon and have even hosted events based around internet freedom at SXSW. Do they follow the laws if they are given a subpoena? Presumably, yes. They have to. They are a US company and are governed by US law. Are they part of a massive FBI conspiracy? Some people might think so. Conversely, some people are smart.

VyprVPN is a quality company, takes your privacy seriously and is a sensible choice in VPN providers for anybody who wants to enhance their Internet privacy.

Founded in 2016, iTop VPN is a secure and reliable VPN service provider that has over 10 million users worldwide.  iTop VPN offers Internet … END_OF_DOCUMENT_TOKEN_TO_BE_REPLACED

OVPN is a VPN service that is said to seriously uphold privacy and security. According to their site and several other sources, they don’t just … END_OF_DOCUMENT_TOKEN_TO_BE_REPLACED

VeePN is a fast and secure VPN service that protects your privacy online. With access to unlimited traffic and bandwidth, 10 simultaneous connections, … END_OF_DOCUMENT_TOKEN_TO_BE_REPLACED