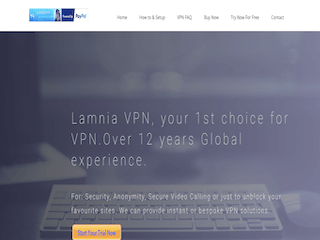 Lamnia gets generally mixed reviews as a VPN service. Based in the United Kingdom, the service offers 128 bit-encryption and servers located in nations that allow you to watch most of the popular streaming television sites.

Lamnia offers dynamic and dedicated VPNs. Pricing varies depending on the package you select.

There is no logging of user activity save for a five-day log that is kept for technical support purposes. Permanent logs are not kept.

Lamnia lists no restrictions on how their service may be used. All accounts come with unlimited bandwidth.

Lamnia has simplified customer support. You can reach them via their contact page. They also have a helpful FAQ page.

You can connect to the Lamnia VPN service directly from the welcome email that will be sent to you after you sign up. There are also extensive instructions given on the website to help you set up your connection manually for the Windows and Macintosh OS X operating systems. The dialer client can also be downloaded from the company’s website.

It is also compatible with  iOS, Android, and Linux however, getting it set up is a little complicated as the provider does not offer native applications.

While Lamnia’s speed is average and is not as impressive as top tier VPN providers. This means if you’re planning to stream online HD videos, you should be prepared for lagging and buffering.

It unblocks a few streaming sites like Netflix and BBC iPlayer but does not unblock Hulu and ESPN.

Lamnia VPN works well with streaming platform, Netflix, and the provider actively replaces IPs that have been detected and blocked by the streaming service.

Lamnia gets mixed reviews from most of the people who have used the service. It offers unlimited bandwidth, which is an advantage compared to some other services but does not offer OpenVPN connectivity, which is currently the most secure and fastest form of VPN access.

Lamnia has all of the basics that most VPN services have and the unlimited bandwidth is a nice touch. The number of nations available from which you can connect is fairly limited, however, and the service has gotten some negative reviews around the Internet. It principally advertises that it is to be used for watching television and, with 128 bit encryption, its privacy potential is somewhat lacking compared to what other companies offer.

Founded in 2016, iTop VPN is a secure and reliable VPN service provider that has over 10 million users worldwide.  iTop VPN offers Internet … END_OF_DOCUMENT_TOKEN_TO_BE_REPLACED

OVPN is a VPN service that is said to seriously uphold privacy and security. According to their site and several other sources, they don’t just … END_OF_DOCUMENT_TOKEN_TO_BE_REPLACED

VeePN is a fast and secure VPN service that protects your privacy online. With access to unlimited traffic and bandwidth, 10 simultaneous connections, … END_OF_DOCUMENT_TOKEN_TO_BE_REPLACED