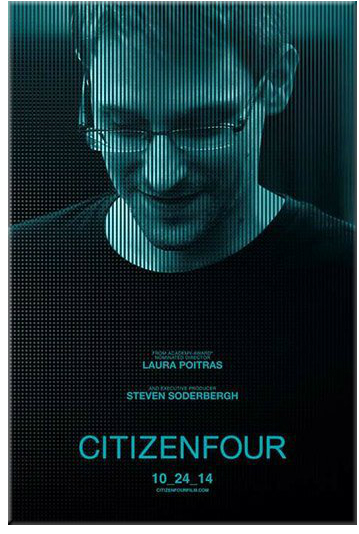 A new documentary from Laura Poitras called CITIZENFOUR covers the Snowden leaks. Poitras herself was contacted by Snowden, who used the title of the film as his alias.

In the course of the film, Snowden reveals some of his motivations for leaking information about the massive spying operation being conducted by the NSA. He references what the Internet was like before, and it’s a much different place than it was then.

Snowden talks about how the Internet in the past was a place that brought people together from across the globe. He talks about how people could get information freely and how they could speak openly, and how that’s no more.

What Snowden revealed is not the only evidence of a chilling trend that has been taking place worldwide. VICE, which also produces documentaries that often deal with politically touchy subjects, covered a massive trade show of sorts for the defense industry held in the Middle East. In that documentary, a representative of one of the companies present explains that, increasingly, nations are using their military hardware not to defend themselves against other nations, but against their own citizens in the name of “security”.

Snowden’s revelations in the press and in CITIZENFOUR reveal that the US government appears to be doing precisely the same with its intelligence apparatus.

Will it Ever Be the Same?

The Internet is not what it used to be. Anytime a user goes online, it’s nearly certain that their ISP is watching at the behest of intellectual property owners who want the Internet monitored for their business interests. It’s also likely—almost certain, in fact—that the user’s data is at least being passively collected by the US government, perhaps actively monitored, as well, depending upon the political dispositions of the user in question.

Right now, users, if they want to be as certain as possible of their privacy, have to actively protect their communications from spying eyes. There are two readily available solutions for this. TOR, the network of relays that has become the bane of the NSA and other spy agencies, is a good option. A VPN also provides encryption for all communications leaving or entering the user’s computer, and provides a great option alone or combined with TOR.

The solution you choose is up to you. What’s not debatable, however, is that we all seem to be the targets of surveillance of one type or another, and whose security is really being protected in all of this is unclear.
Go See the Film

CITIZENFOUR has gotten excellent reviews in Time magazine and seems to be catching a great deal of interest in the media. Poitras is a solid filmmaker and it’s not exaggerating to say that, when Snowden started revealing the full scope of what the NSA was up to while talking to Poitras and Greenwald in his Hong Kong hotel room, it was an historic moment.

The film is sure to add some new insight into the NSA programs and into the information that Snowden linked. Snowden has tried to avoid being the story himself, but the drama he went through trying to get asylum and the government’s targeting of Snowden instead of addressing the issues he brought to like did have the effect of making him the focus of attention. CITIZENFOUR provides a chance to hear everything in his own words, in 2013, when he handed over data that ended up changing the world, or at least how people around the world saw the US government.

Founded in 2016, iTop VPN is a secure and reliable VPN service provider that has over 10 million users worldwide.  iTop VPN offers Internet … END_OF_DOCUMENT_TOKEN_TO_BE_REPLACED

OVPN is a VPN service that is said to seriously uphold privacy and security. According to their site and several other sources, they don’t just … END_OF_DOCUMENT_TOKEN_TO_BE_REPLACED

VeePN is a fast and secure VPN service that protects your privacy online. With access to unlimited traffic and bandwidth, 10 simultaneous connections, … END_OF_DOCUMENT_TOKEN_TO_BE_REPLACED